Donate an amount of your choosing to the work of the Freedom Historical Society and Museum.    If you prefer to make a donation by check, please mail to P.O. Box 548, Freedom, NH 03836.  Thank you for your support!

2023 Calendar: Remarkable People of Freedom’s Past

The 2023 calendar is a tribute to Freedom’s businesses from 1880 to 1920 and to the following remarkable people who built them. These stories reflect a spirit of entrepreneurship, independence, civic responsibility, determination, leadership, and passion, all creating a sense of pride and place for all of us.

2022 Calendar: Remarkable People of Freedom’s Past

The 2022 calendar captures the unique character of Freedom through the stories of 15 remarkable people.  These stories reflect a spirit of independence, civic responsibility, determination, leadership, and passion, all creating a sense of pride and place for all of us.

2021 Calendar: Remarkable People of Freedom’s Past

2020 Calendar: Remarkable People of Freedom’s Past

2019 Calendar: Remarkable People of Freedom’s Past

This calendar captures the unique character of Freedom through the stories of 12 remarkable people. These stories reflect a spirit of independence, civic responsibility, determination, leadership, and passion. Each has shaped our community and history, creating a sense of pride and sense of place.

This beautiful color 2018 calendar, “Camps of Freedom,” presents the history of the numerous summer camps that educated and entertained countless children and adults since early in the 20th century.

The Ossipee Riverlands brings to life the shared and individual history of Effingham and Freedom.  These two New Hampshire towns bordering Maine were once one town called Effingham, with the meandering Ossipee River running through the middle of it.  Over the years the river caused numerous disputes and in 1831, caused Effingham to divide into two towns.

In an effort to “reunite” the two towns in regard to their common heritage, this book brings together a group of pictures grounded in the mutual reliance on one resource, the Ossipee River.  It shows the shift from hillside farming, rural school districts, horse and buggies, and the use of water power to a more mobile society catering to summer boarders, artists, writers, and campers arriving by train, then automobile.

Carol C. Foord, a natural history teacher with the Tin Mountain Conservation Center and past president of the Freedom Historical Society and a member of the New Hampshire Historical Society, and Sheila T. Jones, a member of both the Effingham and the Ossipee Historical Societies, use a wonderful selection of images from local museums, historical societies, and townspeople’s personal collections to create a fascinating book that is sure to be of interest to both year-round and summer residents.  Copyright (c) 2000, 128 pages.

This calendar is a collection recognizable scenes of Freedom as interpreted by gifted local artists.  It conveys the beauty and story of Freedom through the changing seasons of the year, from houses decorated for holidays, to magnificent views from hilltops, to tranquil lakeside.

In the woods and fields of Freedom are the ruins of our agricultural past, the remains of century’s-old stonewalls marking old boundaries and pastures.  They remind us of how extensively Freedom was once cultivated, that 150 years ago most of our land was cleared and farmed.  The enduring beauty of Freedom’s stonewalls is captured in the 2016 calendar by some of Freedom’s most creative amateur photographers.

This calendar captures the beauty of many of Freedom’s beautiful gardens.  Featured photographers are: Merton Sargent Jr., Joe Viger, Karen Hatch, Bonnie Burroughs, Sherry Rehm, Bridger Viger, Ed Boyer, Caroline White, Silas Feuerborn and Kelly Rehm.  There were many “honorable mention” photos as well which are included on the back cover.

This calendar captures the character and beauty of the Freedom community including aspects of family life depicted in events and seasonal pastimes.  Featured photographers are: John Shipman, Karen Hatch, Ann-Marie Knox, Judy Smith, Libby Priebe, Peg Scully, Dick Many, Maureen Elliott, Nancy Griffin, Bonnie Burroughs, Judy Robertson and Silas Feuerborn.  There were many “honorable mention” photos as well which are included on the back cover.

The legacy of the 15 schools that have served Freedom at various times in our history are documented through words and visuals in this calendar.

We were lucky to have the memoirs of Blanche Eastman Watson to flesh out the vital experiences of growing up in Freedom as a student, then a teacher, and a mother and grandmother and great grandmother of other teachers!  Transcribed interviews with Blanche Watson helped us to better understand important transitions in Freedom schools over many years.

In April of 2011 the Town Office Building, formerly the village Grammar School built in 1895, was listed on the state’s Register of Historic Places.  This detailed application process work was done by members of the Heritage Commission with help from the Historical Society Board.

This book is a collection of pictures of the annual Freedom Club of New Hampshire tiles from 1970 to 2000 with historical notes by Carol Foord.  There is an additional tile drawing featuring the original Freedom Cornet Band which was commissioned as a 1976 Bicentennial souvenir.

The first Freedom Club “tile” used a drawing by illustrator, John Holmgren, and was reproduced in 1954 on a plate which could be hung on a wall.  Another Holmgren tile was issued in 1955, then starting in 1970, over 40 more 6 x 6 ceramic tiles have been created by many local artists who submit drawings, usually of Freedom landmarks, to be chosen by competition each year.   They are in great demand by collectors who frame them, cement them into kitchen backsplashes or bathroom walls, or display them in countless creative ways.   The proceeds from the sale of the tiles have supported the Freedom Club charitable efforts and its beautiful beach.

The sale of “Sketches”, a limited edition, benefit the Freedom Historical Society.   A complete collection of the tiles themselves may be seen in the kitchen of the FHS Allard House. 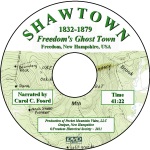 This inaugural DVD of the Freedom History Series chronicles the saga of the Shawtown neighborhood which disappeared right after the Civil War. With videography by Joe Bradley, narrator Carol Foord weaves the story of these pioneer Freedom residents based on her exhaustive research and documentation of their cellar holes.  A great addition to your library.

Reminiscences of the French War

The Rogers portion is derived from the first edition of his Reminiscences published in London, England, in 1765.  It describes Rogers’ expeditions with the New England Rangers under his command.  The Rangers, comprised primarily of New Hampshire men, constituted England’s best defense against the Indians who had allied with France as she and England struggled to establish possession of America.  Duties of the Rangers included spying, ambushing, taking prisoners, and fighting and killing Indians to clear the way for England’s regular troops.  The Rangers were officered by hardy, intelligent men, many of whom would go on to distinguished careers in the Revolutionary War.

Major General John Stark of New Hampshire served as an officer in the Rangers and is considered a hero of the American Revolution.  The Memoir is composed of biographical material, letters, and notices, providing the reader with a personal look at Stark’s life and military career, his strong patriotism and belief in the Revolutionary War.

The 2023 Calendar is here! Click on the below image to go to the online store.

Select the Freedom Historical Society while shopping on AmazonSmile and have a portion of your Amazon purchases donated to FHS!  For more information about AmazonSmile, click here.

The Allard House and Barn